Skip to content
Yes, he said it over the phone to his favorite journalist, Italian editor Eugenio Scalfari of La Repubblica (the Pope’s daily and favorite newspaper), in a conversation on October 28, revealed by the latter in an editorial published this Sunday. 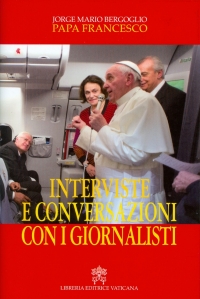 There is no reason to doubt its accuracy. We are way past the time of doubting the accuracy of the Scalfari quotes. Not now, that the papal interviews to Scalfari have been published on the Vatican website, that they have been occasionally published by the Vatican publishing house (LEV) itself – for instance, as part of the book to the right.
It was a direct quote by Scalfari, as the Pope explained to his dear Atheist friend what the Synod had decided (in fact as an answer to another editorial on the Synod Scalfari had published in Repubblica).
The quote is the following:

In the same phone conversation of the past Wednesday, he declared himself very interested in the article I had dedicated to him two Sundays beforehand. He asked me what I thought of the conclusions of the Synod on the family. I responded — as I had already written — that the compromise that the Synod had reached did not seem to take into account the changes had had taken place in the family in the past fifty years, [and] therefore pointing towards the recovery of the traditional family was an objective that was completely unthinkable. I added that the open Church willed by him finds herself before a family that is open both in its goodness and in its wickedness, and that it is this that the Church finds before her.
“It is true — Pope Francis answered — it is a truth and for that matter the family that is the basis of any society changes continuously, as all things change around us. We must not think that the family does not exist any longer, it will always exist, because ours is a social species, and the family is the support beam of sociability, but it cannot be avoided that the current family, open as you say, contains some positive aspects, and some negative ones. … The diverse opinion of the bishops is part of this modernity of the Church and of the diverse societies in which she operated, but the goal is the same, and for that which regards the admission of the divorced to the Sacraments, [it] confirms that this principle has been accepted by the Synod. This is bottom line result, the de facto appraisals are entrusted to the confessors, but at the end of faster or slower paths, all the divorced who ask will be admitted.” [Rorate translation, emphasis added]

Honestly, friends, is there any doubt that is how Francis, who has championed this notion from the first moment, sees this? Is there any doubt this is what will be (with some variation, some Pharisaic language) in the post-Synodal exhortation? Now what?…
Via Rorate Caeli
(Editorial, La Repubblica, Nov. 1, 1015, p. 27 – PDF – 2nd page here)
(Source: La Repubblica – tip, image, pdf provider: Secretum meum mihi blog)

4 Replies to “Pope Francis – “all the divorced who ask will be admitted.””